Is WhatsApp Actually ‘Lying’ To You?

WhatsApp has suddenly been accused of seriously misleading its 2 billion users. The Facebook-owned platform promises it cannot read your messages. Not so, is the shocking new allegation from a major rival, “you’re lying.” 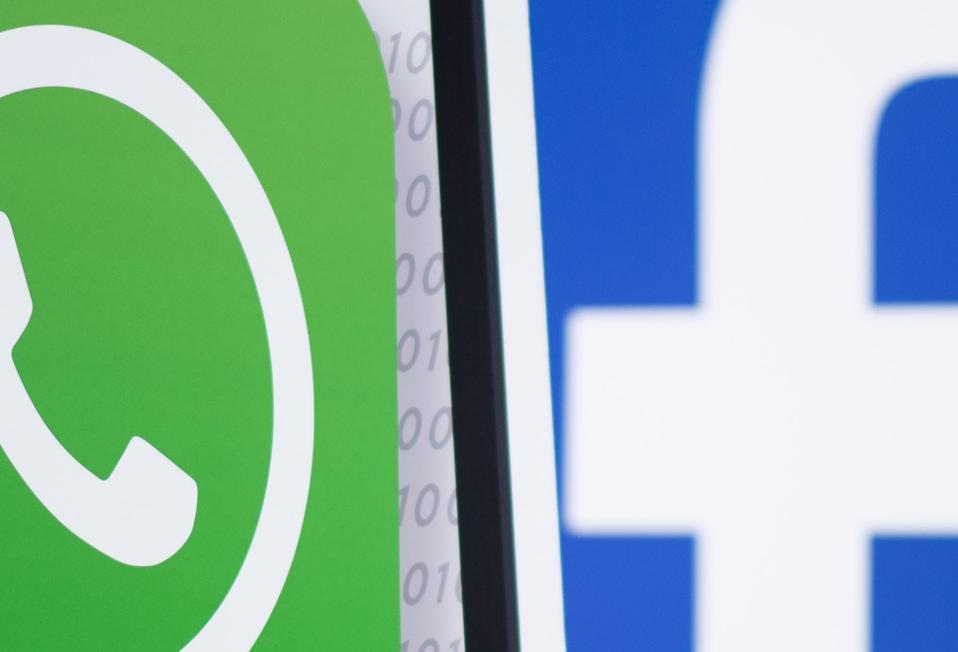 Is WhatsApp "lying" to its 2 billion users?

WhatsApp and rival messenger Telegram have been trading blows on Twitter this weekend, as the Facebook-owned messenger, in the minds of many, shows the true data harvesting colors of its owner and forces new terms on its 2 billion users.

Of the various accusations that Telegram let fly at WhatsApp, one stands out above the rest. WhatsApp prides itself on its encryption, “your personal conversations are still protected by end-to-end encryption,” it says, “which means no one outside of your chats, not even WhatsApp or Facebook, can read or listen to them.”

So important is this encryption, that it was the cornerstone of its defence against this year’s user backlash, as millions reportedly quit after the Facebook changes were announced. “In the past five years,” WhatsApp boss Will Cathcart said recently, “we have securely delivered over 100 trillion messages to over 2 billion users.”

You can’t escape this promise. “No-one outside of this chat, not even WhatApp, can read or listen to them,” the platform even confirms at the top of every new chat.

Not so, Telegram has suddenly charged @WhatsApp on Twitter. “Our users know how things work, talk to the screenshot. It says you’re lying.”

The screenshot is of an unattributed WhatsApp chat stating that Apple and Google can access WhatsApp cloud backups, which is true—albeit WhatsApp already warns users that such backups fall outside its end-to-end encryption. But more provocatively, the screenshot message also alleges that “WhatApp can access this chat because we can restore it on a clean device using just our phone numbers.” 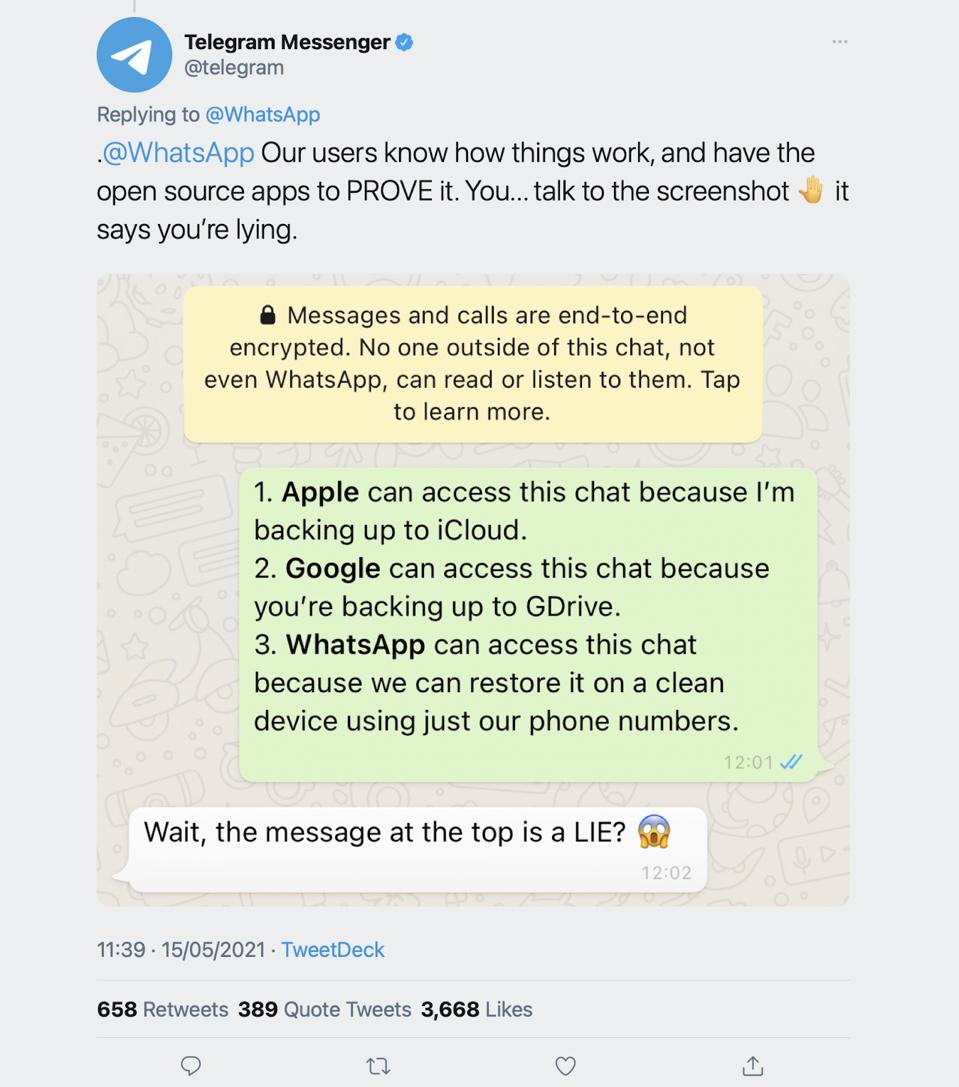 The implication is clear. Beware, this says, WhatsApp can delve into your chats after all, its promise that “not even WhatApp” can read your messages is “a lie.”

Telegram’s allegation came in response to WhatsApp tweeting a meme warning users that Telegram does not offer default end-to-end encryption, which in turn was a response to Telegram poking WhatsApp, as the controversial Facebook deadline date arrived, suggesting it was time to put the messenger and its owner in the bin.

So, what’s the truth here? Should you worry that WhatsApp really is “lying” to you, as Telegram alleges, that it can read all your private messages after all?

First things first. WhatsApp is absolutely right. Telegram does not offer end-to-end encryption by default, with most of its traffic secured by Telegram’s own encryption keys on its own cloud. As such, Telegram can access all this content if it so chooses—your only protection is its adherence to its own privacy policy.

In contrast, Telegram’s accusation that “WhatsApp can access this chat” is very misleading. What it literally means is that if WhatsApp disables your account and installs it somewhere else, under its own control, then it would see future messages in that specific chat. It does not mean that it can access that specific chat’s history.

As such, even if this was done, WhatsApp would see the next messages from your recipient, clearly nothing from you, and one can assume that your contact would not message very much unless and until they received a reply. Clearly, WhatsApp could impersonate you, sending replies, but now we’re deep into the realms of fantasy. The risk here is the same as any form of WhatsApp account hijack.

This is not the same as an interception or the retrieval of historic messages. But the obvious user fear being stoked is that the chat history can be made available. The only way this would happen is if you have backed your WhatsApp chat history to the cloud, as the screenshot says, and the backup was restored to a third-party device.

To secure your WhatsApp chat and media history from prying eyes, you should disable any cloud backups. This will stop WhatsApp or anyone else restoring your backup (if they have access) on a new device, to which they also need to transfer your account. I have never heard of this very hypothetical security vulnerability being exploited.

Telegram has published the unattributed screenshot, with its inference, rather than restating the allegation itself. But it was published from its official Twitter account, appearing to validate the allegation. Telegram claims 500 million users. It should not publish such allegations unless it can clarify and substantiate them.

There’s enough confusion about message security at the moment—we don’t need any more. And on this specific topic, Telegram has form.

“Using WhatsApp is dangerous,” Telegram founder Pavel Durov blogged last year. “WhatsApp uses the words ‘end-to-end encryption’ as some magic incantation that alone is supposed to automatically make all communications secure. However, this technology is not a silver bullet that can guarantee you absolute privacy by itself.”

Backups apart, you should ensure 2FA is setup in WhatsApp, which stops your account being hijacked. Remember, WhatsApp can only be in one place at a time, so even if WhatsApp set up a copy of your account, you’d know because you would be logged out.

There is speculation that WhatsApp will soon offer encrypted backups, which would resolve the backup issue, and also multiple device access. As far as we know, any changes will retain the end-to-end encryption on which WhatsApp has built its huge user base. You really do not need to worry about this security—it’s good and uses the same core encryption protocol as the famously secure Signal.

But Telegram knows that millions of users are spooked at the moment by the thought of data sharing between WhatsApp and Facebook. That change of terms is now mandatory—if you want to continue using WhatsApp. If you haven't yet accepted, you will begin to see persistent reminders and the app’s functionality will be gradually removed until it stops working for you altogether. It really is decision time.

Behind the WhatsApp versus Telegram Twitter battle this weekend is a stark irony. Millions of WhatsApp users have reportedly switched to Telegram over security and privacy fears. But whatever your views on Facebook and the change of terms, WhatsApp is more secure than Telegram—that’s a simple statement of fact.

The point of end-to-end encryption is that the keys to decrypt messages are only held by senders and recipients, not by the service provider as well. Although traffic is encrypted on other platforms, including Telegram, this works between devices and their servers, not end-to-end. As such, those platforms can access content.

According to Sensor Tower, “in the first four months of 2021, Telegram’s installs climbed 98% to more than 161 million, while Signal saw its first-time downloads surge 1,192 percent to 64.6 million.” This was clearly at WhatsApp’s expense, with Sensor Tower reporting that “worldwide installs of WhatsApp declined 43 percent for the January to April period, although they still outpaced its competitors.”

Not wanting to be left out, Signal added its voice to the Twitter mix this weekend, suggesting a move from WhatsApp to Signal is a “switch to privacy.” As far as its tweet is concerned, you can take that seriously. On every level, Signal is more private and secure than WhatsApp and much more so than Telegram.

If you do decide to quit WhatsApp, the only viable cross-platform alternative is Signal. The security-first app is on a 2021 high, telling me that its surge in installs is ongoing. And Sensor Tower says the same—in the last four months of 2020, it says Signal had around 5 million installs—that was up to ~65 million in the first four months of 2021. Expect to read plenty of analysis on the “network effect” in the coming months.