There will be a few dozen prototypes of Google's second AR glasses designed to test things like real-time translation and navigation.

After a sneak peek during its May developer conference, Google is now taking its AR prototype to the streets. The company says it will be testing its AR prototype — which still doesn’t have an official name — in the real world. Judging from the teaser video and use cases, this prototype seems more consumer-focused follow-up to the Google Glass that was repurposed for enterprise use.

There’s a slim chance you’ll actually run into Google’s prototype though, since the company is only releasing a few dozen prototypes to Googlers and “select trusted testers.” It clearly wants to keep its project under wraps for as long as possible, but even Google admits that lab testing has its limitations.

Real life scenarios — Google says it’s planning for small-scale testing of its AR prototype in public settings. The prototypes will have in-lens displays, microphones and cameras, but will also have strict limitations on what it can do. For instance, the AR prototypes can’t do photo or video, but will use imaging to identify things that can be translated or give directions.

We already saw the first potential use for Google’s AR prototype during its I/O 2022 event in May. Google teased that these AR glasses were able to decipher another language in real- time and provide translations in an augmented reality display. 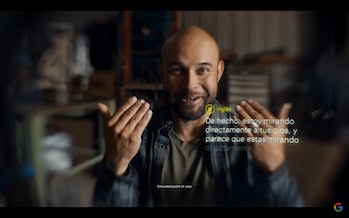 Google teased how its AR prototype could work with real-time translations.Google / YouTube

It’ll be interesting to see the results of Google’s real world testing, since people can sometimes speak faster than real-time translations allow for. On top of that, the AR prototype will have to deal with other real world variables like bad weather or busy intersections when trying to provide navigation.

Hush hush — It seems like Google is exercising a lot of caution here to not spill any beans. Google says it’s focusing on protecting the privacy of the testers and those around them, which also works out well for keeping the project under wraps and outside the competition’s radar.

The secrecy of Google’s AR prototype makes sense. Since we don’t have much to go off, it’s hard to say how this will line up against the AR products that other tech companies are working on. But there are plenty of rumors indicating that Google will face competition from Apple and its mixed-reality headset, as well as Meta’s AR glasses that could be coming in 2024.

Everything we know about the ‘Meta Quest Pro’

Snap's Pixy gets everything right except for one critical feature

Stay up to date

Watch ‘Starman’ drift: SpaceX’s Tesla reaches the ultimate cruising altitude and rides off into space
Marketers Say Facebook’s News Feed Update Will Be ‘Nail in the Coffin’ for Organic Posts
I deleted Facebook off my phone and you should too
Social Media Cheat Sheet 2017: Must-Have Image Sizes!
3 Ways Marketers Can Rise Above the Facebook Noise
When Social Media Marketing Goes Right (And How to Copy It)
JomSocial 4.7.5: Google Login support and more
JomSocial 4.7.4 released for new Social login, 1500+ new Emoji and more !
Create Awesome Photo Effects With These 20 Amazing Photoshop Tutorials
How to Create a Social Media Marketing Strategy From Scratch