In fact, they've become important elements of many colorful public projects, particularly in large cities. However, we've also found that some designers and architects have taken this concept one step further—to the interiors of homes. Take a look at some of our favorite artful murals and get ready to be inspired.

The recently opened W Hotel in Bellevue, Washington, takes cues from traditional Pacific Northwest lake houses for the design of the contemporary interiors. Several murals have been worked into the hotel's interior plan, including a spectacular grand mural that winds down several stories around a floating staircase and depicts the region’s history. 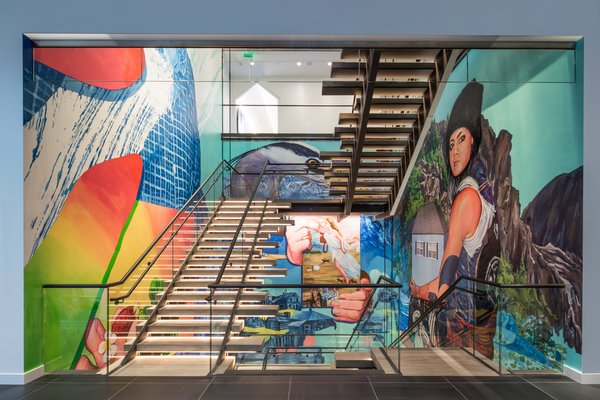 The W Hotel Bellevue features a grand mural depicting scenes of forestry, wildlife, and the history of the Pacific Northwest. 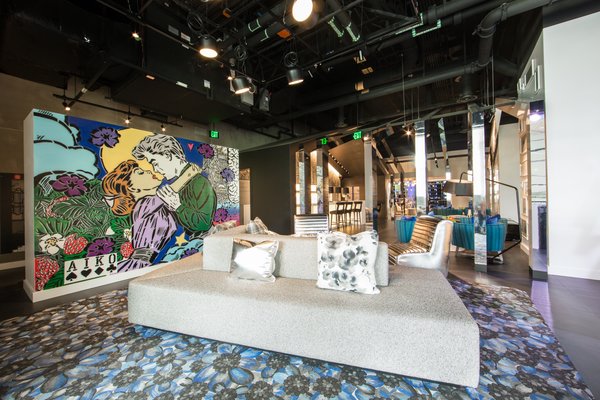 A pop-art mural decorates the "The Living Room." 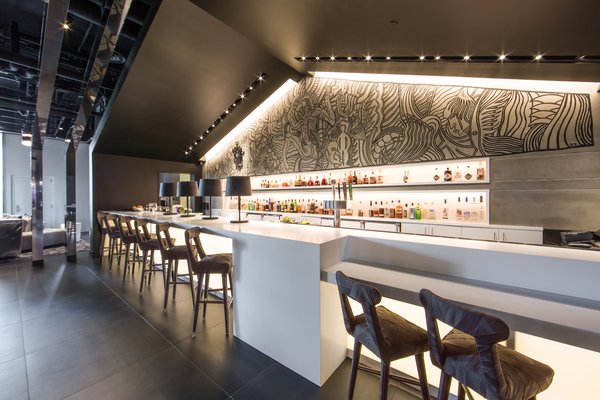 Another large-scale mural is featured behind the hotel bar. 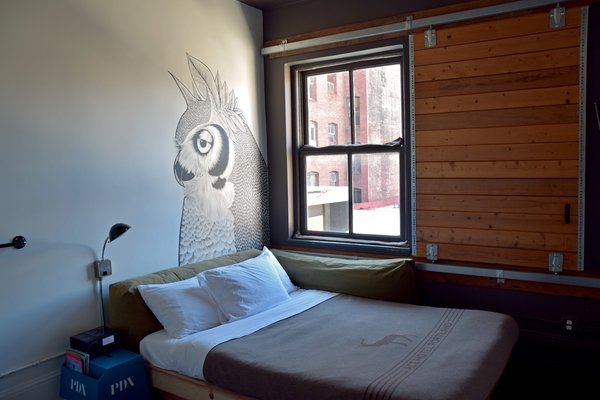 Every room has a different setup, many of which include custom wall murals that are quirky and lighthearted. Industrial and rough details make you feel like you’re camping, including wool quilts from Pendleton for the Ace Hotel, barn door sliding windows, heavy metal hardware, and old claw foot bathtubs.

The Carlton Arms Art Project has become a permanent art exhibit at the Carlton Arms Hotel in New York City, where every room now features colorful works of art by artists from around the world. The art-in-residence program was started in the early-1980s when The Carlton Arms Hotel was a welfare hotel. As rooms were vacated, they were scrubbed, repaired, and given over to artists. The program continues today and offers artists free room and board in New York City for the duration of their project, and has resulted in some dynamic pieces. 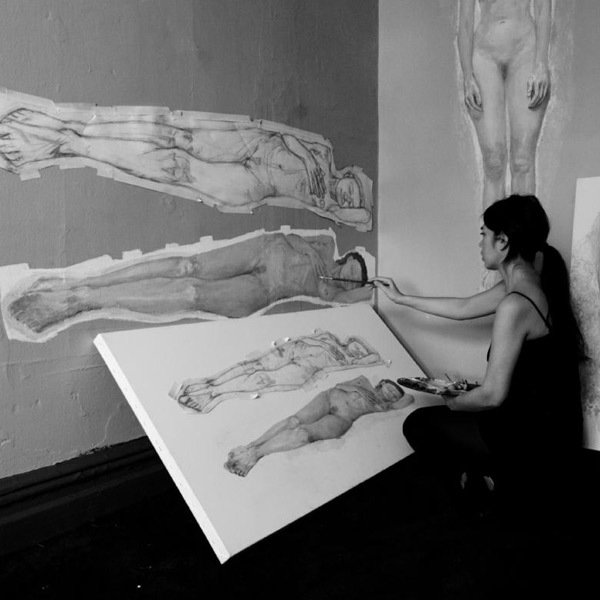 Shown here is Andrea Clinton working hard on a piece in Room 8B.

Espelho de Água was built in 1940 at Praça do Império—the site of that year's Exhibition of the Portuguese World—to serve as the restaurant for a celebration of the country's formation. The building had undergone subsequent renovations that muddied its modernist style, but DC . AD and Victor Vicente recently returned to restore the building. They transformed it into a lively dining room and art gallery, preserving an original mural by Sol LeWitt. 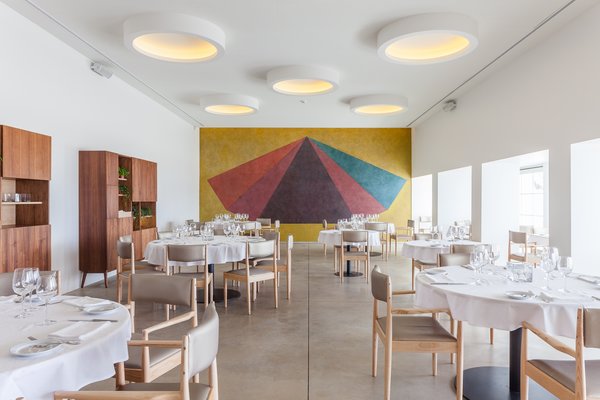 In the dining room, a mural by Sol LeWitt, painted in 1990, was uncovered. A circular theme, introduced in the original project, is reinforced by round lamps throughout the interior.

The Surfjack in Waikiki, Honolulu

Located just a 10-minute walk from Oahu's Waikiki Beach, the design of the Surfjack Hotel & Swim Club takes a step back in time to Waikiki’s midcentury heyday. The covered cabana area by the pool showcases a hand-painted mural by Brendan "The Blob" Monroe that creates a funky backdrop inspired by the flow of water. Local artist, illustrator, and curator Jasper Wong co-curated additional mural artwork, which is dispersed throughout the property. 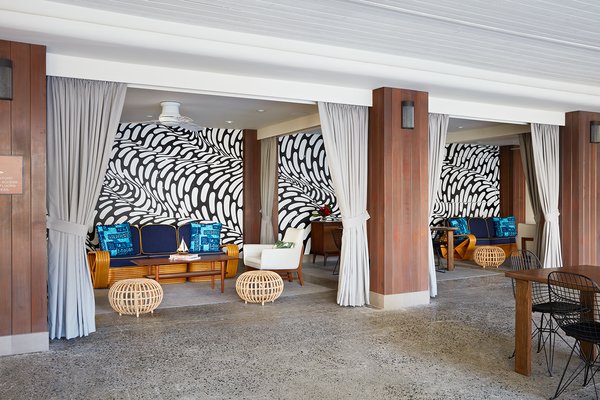 In addition to the space being filled with furnishings, lighting, and artwork by a range of local designers, every little detail was thoroughly thought out and branded to fit seamlessly with the Surfjack ethos. Shown here is the hand-painted mural by Brendan "The Blog" Monroe.

Forest For the Trees in Portland, Oregon

Supported by donations, Forest For The Trees is a nonprofit organization formed in 2013 that's dedicated to the creation of contemporary public art in Portland. Essentially an annual mural festival, which brings together local and international artists to create public art for the city, the name comes from the phrase, "can't see the forest for the trees," signifying an inability to understand the big picture when you're only focused on what's in front of you. 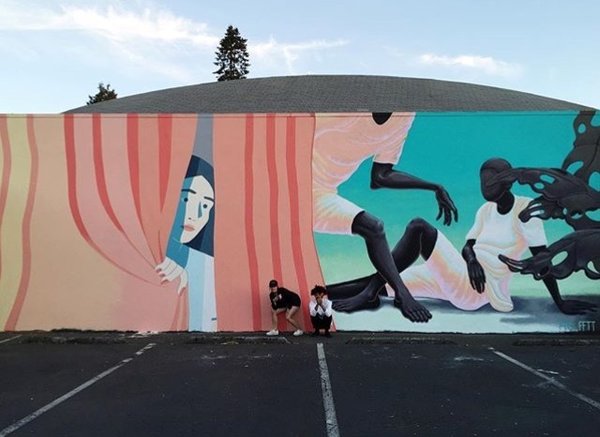 Local and international artists create lasting works that are accessible to the public. This mural by Molly Bounds and Alex Gardner is located at Disjecta in north Portland. 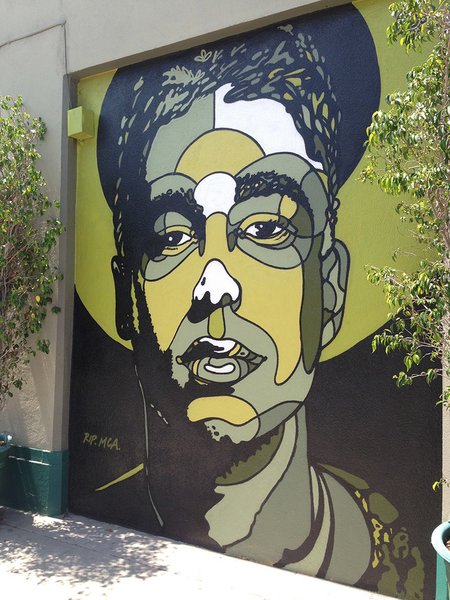 This magnificent Miami street mural was painted by artist Maya Hayuk for Art Basel 2013. Invited by Wynwood Walls to create a work of art for their "Women On The Walls" project, Hayuk's geometric mural is a blast of tropical color. 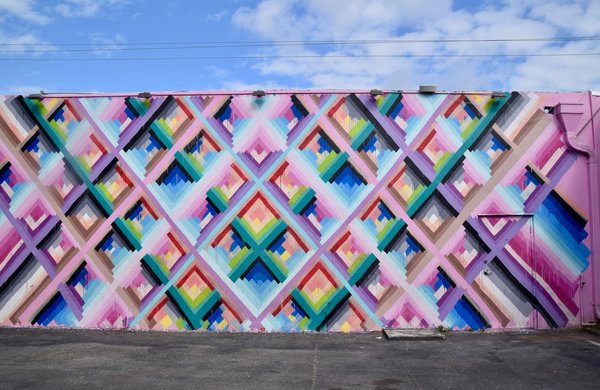 Maya Hayuk's colorful wall mural in Miami, which was created for Art Basel in 2013, features an energy that's fit for the streets of this vibrant city.

British artist Louis Masai traveled across America in 2016 to fight species extinction through art. Here, Florida's Manatees get a shout-out on the streets of Miami with this colorful mural. 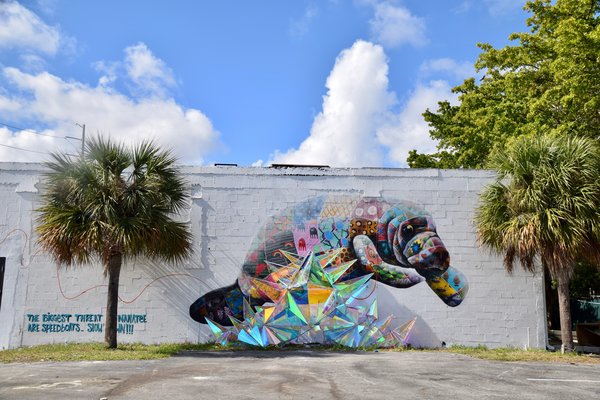 Take inspiration from street art and hotel design in your own home by applying the art form to your own walls. Murals can also look great on ceilings, as observed in this playful design that Matthew Hufft created for his children's playroom in his family's home in Kansas City, Missouri. 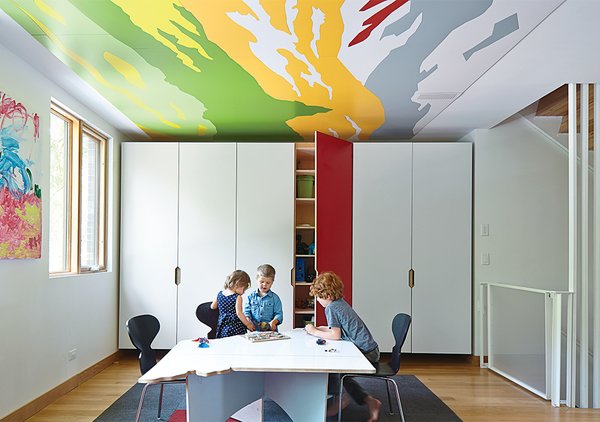 The ceilings in the children’s rooms and playroom feature abstract details from Thomas Hart Benton paintings. Hufft Projects designed the marker-board table, which was cut in the shape of the state of Missouri.

Watch ‘Starman’ drift: SpaceX’s Tesla reaches the ultimate cruising altitude and rides off into space
Social Media Cheat Sheet 2017: Must-Have Image Sizes!
When Social Media Marketing Goes Right (And How to Copy It)
Create Awesome Photo Effects With These 20 Amazing Photoshop Tutorials
How to Increase Your Sales 49% Faster by Using YouTube
How to Create a Social Media Marketing Strategy From Scratch
How to Start Your Own Business Using Any 1 of These 12 Marketing Skills
4 Best Tools for Social Listening
Marketers Say Facebook’s News Feed Update Will Be ‘Nail in the Coffin’ for Organic Posts
I deleted Facebook off my phone and you should too